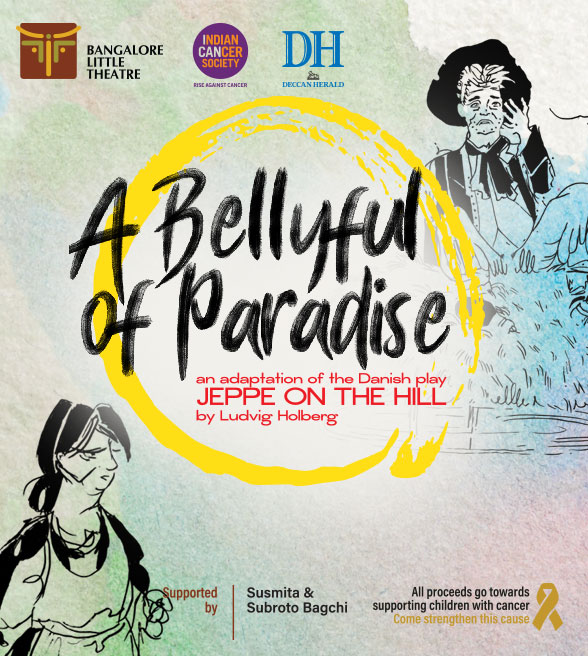 A Bellyful of Paradise - The original play is called Jeppe on the Hill.  It is by the foremost dramatist of Denmark, Ludvig Holberg, a contemporary of Moliere in France, and a prolific writer in his time in several genres. The story in Bellyful has a lovable rascal called Jeppe with a weakness for the bottle. His wife Nille is after him all the time. She does this most effectively with a whip that she uses unhesitatingly. It is not clear if the whip leads Jeppe to the bottle, or it’s the bottle that leads to the whipping. One day when he has passed out from one too many, a nobleman passing by decides to play a prank on him. Jeppe is taken to the manor on a hill, dressed in fine clothes and put on a luxurious bed. When Jeppe wakes up he is made to believe that he is the Lord of the Manor. What happens thereafter is best seen on the stage as a truly comic tale from a master storyteller. The social commentary in the play is not to be missed.

Abhijit Raghunathan – having discovered theatre by chance, it has almost become second nature to Abhijit. He has acted in a few plays over the last year or so with Moilere's Sganarelle and Photograph 51 being the most notable. He is a former state-level tennis player.

Aditi Arora is an academician, a professor in linguistics and skills training. She loves reading, writing (poems and prose equally) and has an unconditional love for dance. She caught the theatre bug way back when she was a part of the dramatics team during her college days. After a break from theatre due to other commitments, she is now back on stage with Bellyful!!

Aditye Nair is a theatre professional who has been in this field for over seven years and pretty much does it for a living. Loves the stage and almost everything related to it. His first production was an annual children's fundraiser by Bangalore Little Theatre (BLT). He is also a member of the BLT managing committee.

Annie Acharya is from Odisha and has been into fine arts ever since her childhood (specializes in charcoal portraits). Annie vouches that she discovered herself and her passion for theatre through her association with Bangalore Little Theatre’s – SPOT workshop, 2015. She works in a corporate as a Senior HR Business Partner and is also an aspiring Marathon runner.

Anup Raja is a theatre enthusiast who's been making a name for himself in the Bangalore theatre circuit for the past four years. He believes in love at first sight and claims to have fallen for the stage and the spotlight.

Avantika Gautam is a software engineer, but she is more than happy to moonlight as an actor. She has acted in many plays including Frisky Suspenders, Maya Bazar, Sanjukta, The Nukkad, That Woman and Ashk Neelein Hain Mere. Hailing from Bihar (she pre-emptively threatens to give you an earful if you start reinforcing stereotypes).

Chaitra Pallavi is a Media, Marketing & Communications professional who loves art and art forms.  She tries her hand at acrylics on canvas painting in free time and is an amateur to the world of Theatre. Chaitra debuted last year with 'The Year of the Rooster' and this year she is laying her hands-on designing costumes and playing a supporting role in 'A Bellyful of Paradise'.

Harshitha Bhasker is a pastry chef by profession, started theatre very early on. She worked with Bangalore Little Theatre in the play Rigmarole and has also done many other plays in the past but took a long break to focus on her entrepreneurial venture Sinalicious Desserts.

Karan Manveer Singh Dalal is an old timer with Bangalore Little Theatre. He has been part of several productions including Rhinoceros, The Prophet and The Poet, Rooster and Tell Me the Name of a Flower. Karan will do anything for theatre - backstage, onstage and even off stage. He gratefully acknowledges the role played by BLT in his life. Apart from this, he is a trainee trainer in Theatre Appreciation.

Karuna Chandwani is a new entrant in the theatre community. She hails from the national capital city and A Bellyful of Paradise is her second play. She plans to become a fulltime theatre and voice artist.

Santosh Patil is a Civil engineer by profession; he started his theatre journey last year from BLT annual children production - The Year of the Rooster.

Sneha Chandrasekhar is a curious debutant in the field of theatre, she is also pursuing a course in Applied Theatre & Production. She is a mother, a homemaker and loves it all! Professionally she has donned many hats - including that of a Lecturer, Statistical Assistant, Business Operations Analyst & Technical Program Manager! She loves singing & listening to music. She is interested in watching Lawn Tennis & Cricket.

Solomon Paramel (Baron/ Judge) has been a member of Bangalore Little Theatre for many years. He has acted in many plays like Waiting for Lefty, The Birthday Party, Mrichakatika - The little Clay Cart, Robi’s Garden and participated in Theatre Festivals. He is in the business of Construction, Turnkey Interior projects, Furniture, Designer, Doors and Plywood.

Sridhar Parthasarathy has been ‘playing’ for quite a while; from the 1980s, to be precise. Back in his BITS, Pilani days he had helped with backstage operations for various plays; also acted in a couple of them. He put up a play in Bangalore (Cactus Flower) way back in 1995. Recently he did backstage & photographs for BLT's "Photograph 51". When he is not acting in plays, he runs an information security consulting business.

Subodha Subrahmanya is a freelance theatre artist who always dreamt of being an actor in life. Got his break three years ago with "Emil's Enemies" with Bangalore Little Theatre (BLT). He has been involved in many BLT productions since then and has worked with other theatre groups in Bengaluru such as Art-rightis, Katharsis, Barking Dogs and Atul Kumar from The Company Theatre in Mumbai.

Venkatesh S is an unprofessional chump roaming the cellars of the IT world. Otherwise a cinephile, he has worked with Bangalore Little Theatre as part of the production crew in their previous outings.

Vijay Sharma BLR is a theatre actor and storyteller. He has acted in plays like Bichoo, Witness for the Prosecution, Schweyk in the Second World War, Emil’s Enemies, Maya Bazaar and Societal Woes. He is the Honorary Secretary at the Indian Cancer Society, and a member of the Board of Trustees at Karunashraya (Bangalore Hospice Trust).

Vincent Fernandez has acted in Maya Bazaar and Sanjukta with Bangalore Little Theatre. He is a marketing professional, born and raised in Bangalore.

Sahana Nagaraj is an artist by nature.  She is a trained Bharatanatyam dancer, music enthusiast, and now a professional makeup artist. The Stage has been very close to her heart. She has had a successful corporate career for over ten years and is now testing waters in theatre. She debuts with “A belly full of paradise”.