A Little Calm Before The Storm

A Little Calm Before The Storm 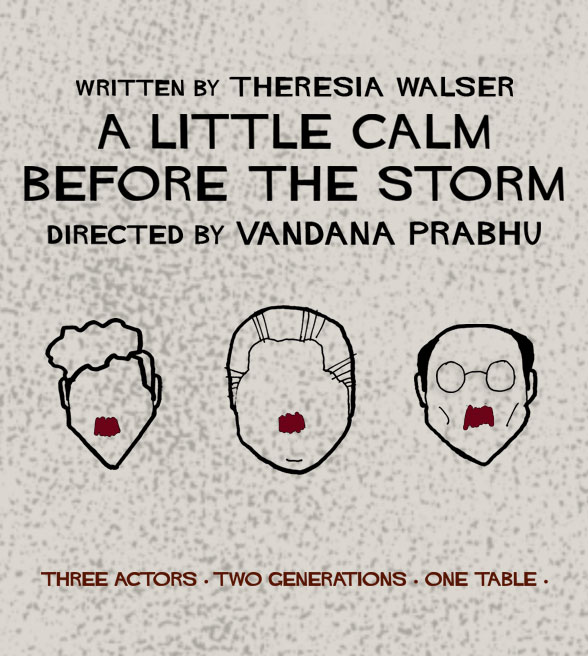 From the director of “Rabbit Hole” and “The Twits”, comes a brand new comedy. Sandbox Collective presents:
A Little Calm Before The Storm
Three Actors. Two Generations. One Wobbly Table.
An informal conversation before a public discussion on portraying evil takes an absurdly comic turn. What emerges is a clash of cultures and egos between the old and the new. Sparkling with wit, the play is a reflection of our times of life in the theatre and outside,  making it a compelling watch.

Widely adapted and performed across the globe, this production premiered at Deccan Herald Theatre Festival, 2017, and is now performing at Jagriti Theatre.
Supported by Goethe-Institut /  Max Mueller Bhavan.

His last directorial venture was Craig Wright's 'The Unseen".

He is currently acting in Sandbox Collective's production of Theresia Walser's 'A Little Calm Before The Storm', directed by Vandana Prabhu.

Roy Sinai:Roy Sinai is an actor, photographer and visual media consultant based in Bangalore.
Roy has appeared in Bangalore productions  of  “ The Dreams of Tipu Sultan” ,    “One Flew Over the Cuckoo’s Nest” , and “ At Home At The Zoo”   He also played  in David Mamet’s “The Shawl”  and Craig Wright’s “The Unseen”   He was part of a 4 person improvised ensemble cast of Jagriti’s “The Worker’s Bible”  which was based on Dario Fo’s texts.

Kinjal Majumdar: An engineer by trade, Kinjal Majumdar's educational pursuits brought him to India from Canada. Over the course of the last decade, Kinjal has performed in a variety of productions such as One Flew Over the Cuckoos Nest, My Children My Africa, And Then There were None and Dracula, in Bangalore, Chennai, Manipal, and Calgary, Canada. Balancing his life as an engineer, Kinjal is currently pursuing his aspirations in writing, film, and theatre.

Vandana Prabhu: Vandana Prabhu is an actor, director and drama teacher based in Bangalore. She is an Associate of Trinity College London in Speech & Drama and has been a faculty member at Jagriti since 2012. She has curated and managed Arts-in-Education programs for Sandbox Collective in 2015.

She has directed Jagriti productions David Lindsay-Abaire's Rabbit Hole (2016), Roald Dahl's The Twits (2014)  and "A Little Calm Before the Storm" for Deccan Herald Festival 2017.
She has done over 200 shows at festivals and cities in India and US including performances in Girish Karnad's "Yayati", Edward Albee's "At Home at the Zoo", Neil Simon's "The Odd Couple", Sarah Ruhl's "A Deadman's Cellphone", Anita Nair's "A Twist of Lime",  Miro Gavran's "All About Women", Mahesh Dattani's "Bravely Fought the Queen".