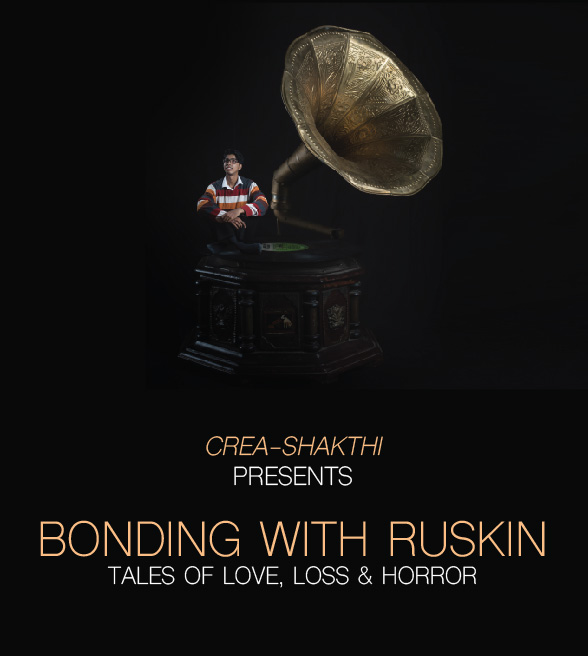 About The Play:
The Play which has a feast of colour and sound, looks to recreate the innocence and irreverence of Ruskin Bond’s stories on stage. As it is with most retellings of famous writers’ on stage, Ruskin Bond himself plays a pivotal character in most of his stories. The greatest attribute of the stories threaded together as a play you will see, is the range of his writing – in terms of plot, landscapes, characters and genre. From his love for the quiet hills of Deoli to the haunted mansions in Dehra. From innocent tales of unrequited love to terrible stories of violence in marriage. We as an audience journey into each story as his characters journey through a train - and at each stop – a different tale awaits. The play attempts to weave together a variety of musical & storytelling techniques with the text of bond providing a completely different yet honest perspective of the writer’s best stories. Bring your entire family and relive the stories of a legendary writer!

About The Writer:
Ruskin Bond is a well known Indian Writer in English. He has written more than hundred short-stories, six novels, three collections of verse and over thirty books for children. Ruskin Bond received Sahitya Academy award for his book “Our Trees Still Grow at Dehra” in 1992, and was honored with title “Padma Shree” in 1999, for his life time contribution to Indian literature in English. He has been writing for the last fifty years in different genres of literature. 3 generations of Indians all over the world have grown up reading his stories. The stories you will see have been weaved together from his writings over the years into short episodes of music & theatre as a glowing tribute to a man who makes even the mundane interesting with his writing.

Dushyanth Gunashekar, Founder & Creative Head – has directed 4 plays in his 12 years as a Theatre artiste - apart from having acted, produced and written as well for stage but primarily working with theatre in education. He believes in making theatre a communion and that which must reach out to masses especially the young and Dushyanth has trained several youngsters to take up the craft seriously and embrace its many benefits. This is his second directorial venture for The Madras Players after “Bhopal” in 2011 which at that point in time made him the youngest ever director in their history. Dushyanth directed plays of note like “Ratan Thiyam’s Chakravyuha”, “Rahul Varma’s Bhopal”, “Mahesh Dattani’s Snashots of A Fervid Sunrise” and now “Bonding With Ruskin”