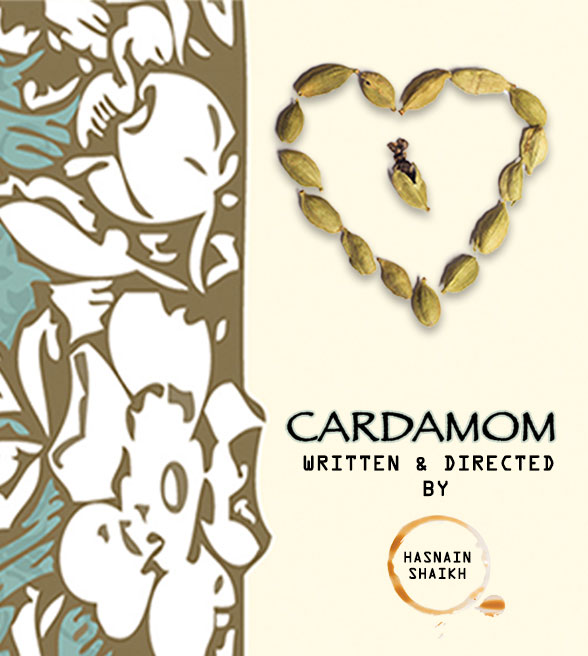 When the Shankars decide to cohabitate with their soon to be in-laws a week before the wedding, they scarcely imagined the difficulties of such an arrangement. The two progressive families are thrilled to undertake the wedding but soon discover that there exists convention in the act of being unconventional.

Cardamom is a comedy set against the backdrop of an Indian wedding and showcases every bone-rattling speed bump along the way. The play is an uproarious take on the peculiarities of Indian families, the plight of the tinder generation, and changing landscape of morality in India. Cardamom has wowed full houses before and is coming back on public demand!

An actor from the age of 5, is a 24 year old writer with 3 already highly successful and acclaimed shows under his belt. His first play ‘Perspectives’ was written at the age of 17, which garnered high praise, and earned him the title of ‘Bangalore’s youngest playwright’. His second show ‘Cardamom’ was a smash success. The Hindu even placed ‘Cardamom’ on its list of the best plays of 2016. His 3rd original script ‘Between Bestsellers’ was performed for 4 shows at Jagriti theatre and was received tremendously well. He has launched his own theatre troupe, which serves as a new wing of the Bangalore School of Speech and Drama, Natak Nation. His most recent production ‘Running in Place’ was well received by audiences in Jagriti and Rangashankara in early 2018.  Running in Place went on to win 6 awards at the 13thInternational Theatre Festival, Bareilly.

Aaron Julius Punnen:   While being a medical doctor, acting is something Aaron has been passionate about ever since stumbling upon it in school. Since then, he's been on stage, film, commercials, comedy shows and radio. He also enjoys teaching children theatre.

Navoneil Bhattacharyya: Navoneil has performed in various devised, scripted and playback theatre productions in Bangalore and the UK. He's also a poet and author of short and long fiction. He is a mechanical engineer from NIT Bhopal and holds an MBA from the University of Oxford, UK.

Amit Ray: Though a non-techie, Amit steers the strategy ofa mobile-tech company in between watching TEDx and cosmology videos. He pursues other interests like teaching and mentoring students despite rumours that his efforts leave the students further confused. With his remaining time, he is happily married to his best friend. An exacting rationalist, he feels that he will be able to tide over the anxiety of his daughter’s marriage with the help of heavy doses of Cardamom

Sangita Nambiar:  Sangita is an ex-copywriter (though she continues to make occasional forays into advertising) and published author of - From Within The Brink a book of poems. She is currently enjoying exploring the world of theatre.