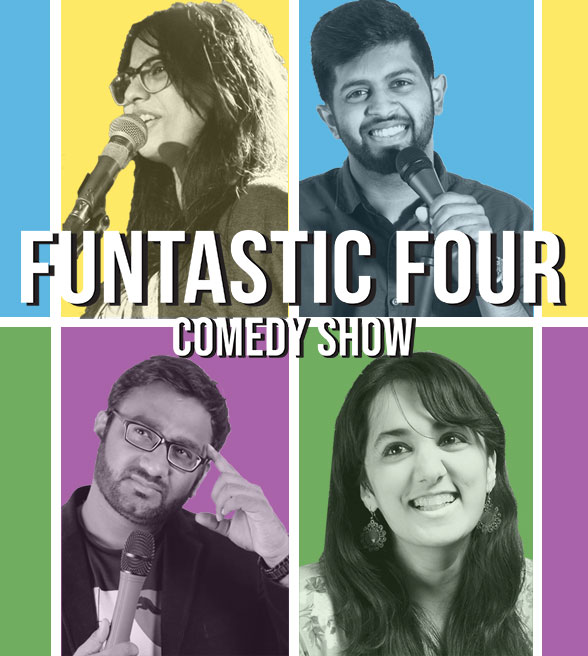 Funtastic Four is a comedy event which happens every month at Jagriti Theatre. The show features four superheroes from Bangalore, who all have basically one superpower- to make you laugh till you drop. It is a one-of-a-kind comedy show which promises to tickle your funny bone. Come treat yourself to a day of laughs with the Funtastic Four!

Pooja Vijay, a Tamilian who identifies as a Bangalorean, decided to pursue comedy after she realised that she needed a hobby other than Facebook stalking. Through her comedy, she brings a fresh perspective to life as a stutterer (yes, just like the Nescafe ad!), the funny side of being South Indian living in Delhi and her failed attempts at romance. She has performed in multiple cities across India including Hyderabad, Delhi, Chennai, Mumbai and Kochi. She has been featured in leading media platforms such as NDTV, Femina and leading newspapers.

Sejal Bhat used to be an analyst at an investment bank, an ex-editor at a business publishing magazine and a former journalism student. She is currently a co-founder at Anderooni, a women's only space for performing arts and expression. A serial hypocrite with unjustifiably high self-esteem, Sejal has an inappropriate sense of humour that hits you like a fresh rajma fart in a library. She firmly believes in having no concrete beliefs and in mocking those who do. It provides fodder for comedy and fills the void where her soul should be.

Anand Rathnam is a civil engineer turned stand-up comedian. Performing since 2015, having loved and lost, and having repeated this cycle several times, he is now convinced that he knows life better than anyone. Anand's brand of comedy is observational and opinionated, mostly drawn from real life experiences. Unlimited exposure to it is certainly not injurious to health.

Vikash Paul is a Chartered Accountant by qualification and a stand-up comedian by passion. In last 3 years of doing professional stand-up comedy he has shared stage with big names in Indian stand-up comedy scene like Zakir Khan,  Kanan Gill, Kunal Kamra, and Kenny Sebastian. With close to 150 shows, he has become a regular face at popular comedy venues across Chennai, Mumbai, Bangalore, Delhi and Kolkata. Popularly known as 'joke writing wizard', a commerce graduate from SRCC (Delhi), he brings to the table a very refreshing