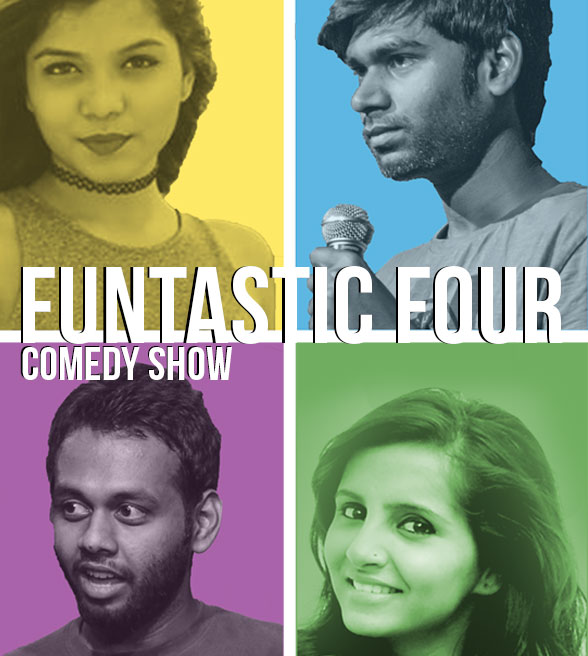 Funtastic Four is a comedy event which happens every month at Jagriti Theatre. The show features four superheroes, who all have basically one superpower- to make you laugh till you drop. It is a one-of-a-kind comedy show which promises to tickle your funny bone. This edition you get to meet Reality TV Show Stars from The Great Indian Laughter Challenge and TLC's Queens of Comedy/ Queens vs Kings.

Sneha Suhas is a stand-up comedienne based out of Bangalore. She found it hard to tickle people as it is inappropriate, so she stands afar and tried jokes on them. With more than 100 shows in her kitty, she's performed in all major cities in India and abroad in Australia.

She is an amateur film-maker, self-proclaimed cook and a full-time film enthusiast. She sometimes gets artistic and writes literature or paints still life to make up for the lack of a legit social life. She loves the stage and has worked with various theatre groups in Chennai.  In 2017, she was one of the finalists in Queens of Comedy, a reality TV show by TLC looking for India’s stop comedienne. In 2018, she was one of the panellists in the TLC spinoff called Queens vs Kings alongside Anu Menon, Rahul Subramanian and Kumar Varun.

While writing this bio and addressing himself in the third person, Sumit Sourav realized that his observation skills are good. This helps him write about the contradictions in everyday situations. His skill allows him to paint a picture in the audience’s mind. Let’s try it now. Can you imagine some tamarind? I’m sure you can’t imagine this without your mouth watering. However, if you are craving some tamarind with a pinch of salt, then don’t give thank him. Your imagination deserves the credit!  This is exactly what Sumit tries to do with his stand up material. He tries to trigger an emotion which provokes laughter because his audience is good at connecting the dots. Now, imagine a jasmine flower? I’m sure you can smell the aroma, right? No? Oops. .

He describes his stand-up as anecdotal. He is a big fan of Jim Carrey, Patrice O'neal and Bill Burr. Last but not least he loves milkshakes. He has performed at more than 100 shows throughout the country. He recently featured in 'The Great Indian Laughter Challenge'.

Kjeld Sreshth (pronounced keltsray-sssht!) is an idiot who grew up watching way too many movies as a kid and as a result, he is now convinced he has dreams in life! After finding out about the comedy scene in the city, he quit his corporate job and began to pursue a career in comedy, a mistake he hopes, one day, will make a great story to tell! Also, he's the one writing this description and he wants you to know that it's really weird to talk about oneself in the third person. Come down and watch Kjeld at any of his gigs, try his best to convince people to join the religion he just started.