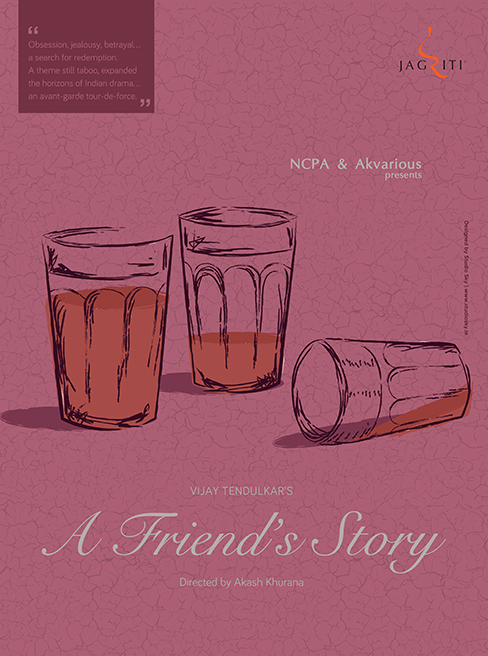 Set in and around a college campus in Poona (now Pune) in the 1940’s, A Friend’s Story is about three students – the diffident Bapu, the carefree Mitra, and the deceptive Nama.

When Bapu’s improbable wish of getting to know Mitra oddly comes true, little does he know that he would soon become party to her inner struggles with her sexuality, and eventually get drawn into a game of vacillating sexual politics between her and Nama, the girl she desires. Nama, on the other hand, enjoys being in a relationship with both, her aggressive boyfriend Dalvi and Mitra. But her turmoil begins when she is confronted with their possessiveness and the consequences of making a commitment. Mitra fascinates and frightens Bapu at the same time, and his inner conscience continues to question the morality of her behaviour. But he starts getting accustomed to his new unconventional friend even as he becomes the guardian of her secrets. But when Bapu’s only other friend, his roommate Pande, gets smitten by Mitra, he finds it necessary to reveal to Pande that Mitra is ‘different’ and not interested in men.

Essentially a love triangle, A Friend’s Story is Vijay Tendulkar’s understated ‘Greek tragedy’ about obsession, jealousy, betrayal, and a search for redemption. Based on events that took place around the middle of the last century, about a theme that many still consider taboo, the play that once expanded the horizons of Indian drama, stands out even today, as an avant-garde tour-de-force.