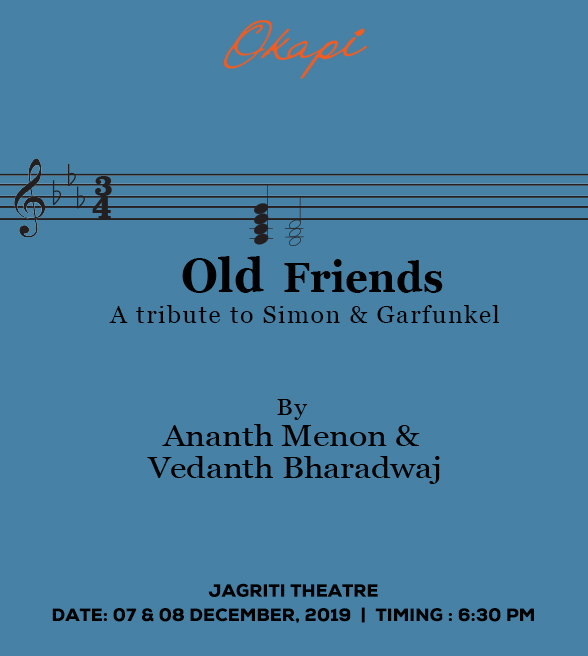 A tribute to the most popular songs of Simon &  Garfunkle by Ananth Menon and Vedanth Bharadwaj.

Ananth Menon and Vedanth Bharadwaj are old friends. They met in high school, at the picturesque Rishi Valley. Their connection was instant. A shared love for harmony and music brought them together and many school days and nights were spent singing songs and making music. They played for their friends, they played at a school assembly and it was evident that music would play a big part in their futures.

Ananth Menon is a guitarist and singer from Bangalore, India. Ananth has been active in the blues and rock scene for the last 16 years and is one of Bangalore's most recognisable voices today.

It was the release of Eric Clapton's Grammy-winning Unplugged album that changed Ananth's life - from Clapton, he quickly discovered the hallowed world of delta blues and from then on there was no looking back. Ananth started his journey into music as a bass player for Bangalore's oldest surviving blues band, the Chronic Blues Circus. He went on to play the guitar in one of Bangalore's most infamous rock bands, the Galeej Gurus. Ananth also played in a short-lived, but critically acclaimed rock band Parachute XVI, releasing a four-song track.

Ananth's latest project is By2 Blues in collaboration with Vasudev Prabhu. After performing as a duo for four years, they were joined by Joe Anthony on the Cajon. The addition of the Cajon supercharged the duo's already energetic sound and the trio are working towards their first official music and video releases, launching at the end of this year.

Vedanth Bharadwaj is a multi-faceted musician who dabbles in several genres of music. He has composed the music for the Tamil feature film Aruvi. He makes music for films, ads, dance and theatre productions. He specialises in singing songs written by mystic saint poets from the Bhakti and Sufi traditions. He has sung at several music festivals at prestigious venues in India and abroad. He has formally learnt Carnatic, Hindustani and Western classical music and is currently under the tutelage of Sri Ramamoorthy Rao.

Vedanth is the director of the Chennai Children's Choir, a choir of children from economically challenged backgrounds, and they recently represented India at the Serenade Chorale Festival and sang at the prestigious Kennedy Centre in Washington DC.

Vedanth has done his Masters in Psychology and an MBA in Corporate Communication and Advertising.