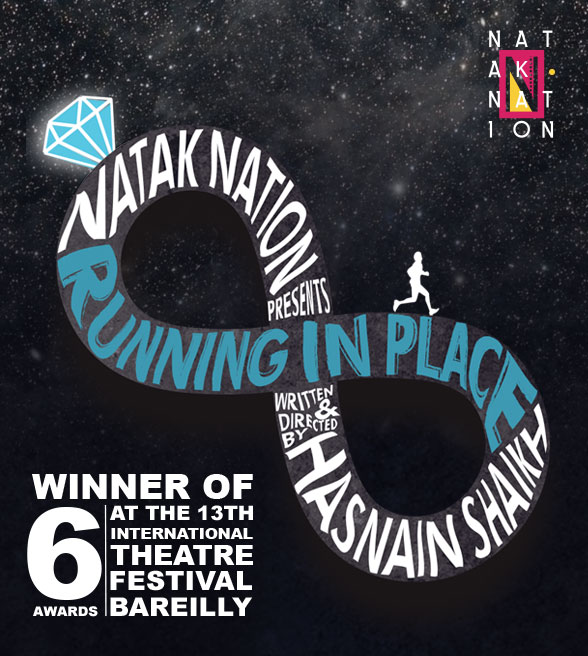 From the team that brought you ‘Cardamom’ and ‘Between Bestsellers’, comes the another run of their original show ‘Running in Place’. It is the story of Prateek and Neha as they re-examine their relationship, in light of their recent split, trying to figure out where it all went wrong. A journey that takes them from their first date to their last. A journey to confront their demons, both real and imaginary. The story explores the themes of love, loss, and guilt, with plenty of emotional twists and turns, and a healthy measure of humour. After a successful run at Jagriti, Ranga Shankara and bagging 6 awards at the 13thInternational Theatre Festival in Bareily the team brings it back by popular demand!

An actor from the age of 5, is a 24 year old writer with 3 already highly successful and acclaimed shows under his belt. His first play ‘Perspectives’ was written at the age of 17, which garnered high praise, and earned him the title of ‘Bangalore’s youngest playwright’. His second show ‘Cardamom’ was a smash success. The Hindu even placed ‘Cardamom’ on its list of the best plays of 2016. His 3rd original script ‘Between Bestsellers’ was performed for 4 shows at Jagriti theatre and was received tremendously well. He has launched his own theatre troupe, which serves as a new wing of the Bangalore School of Speech and Drama, Natak Nation. His most recent production ‘Running in Place’ was well received by audiences in Jagriti and Rangashankara in early 2018.  Running in Place went on to win 6 awards at the 13th International Theatre Festival, Bareilly.