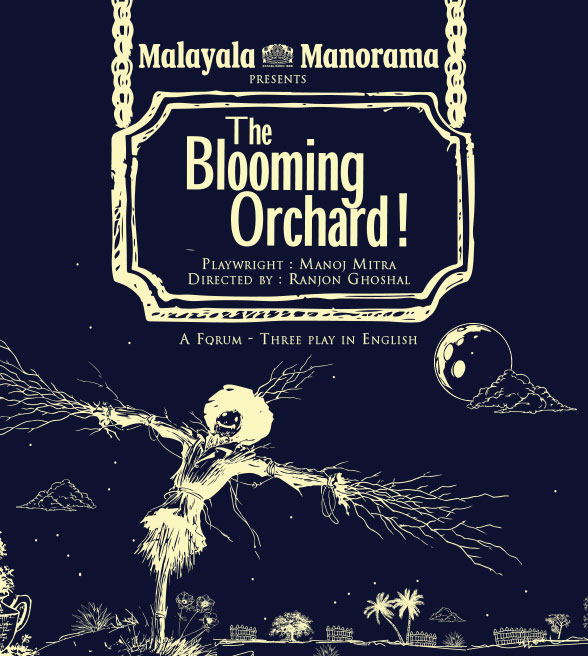 Synopsis:
Bancha Kapali is a 95-year-old fruit farmer who owns an orchard that has been coveted by the high and mighty for ages. A greedy land-grabber senses the old man's vulnerability and strikes up an unusual deal with him in order to acquire the orchard. As the story unfolds, we witness an uproarious turn of events involving a petty thief, a confused village quack, a bluffing astrologer, a love-struck wannabe film producer, a political rowdy, a city lass married to a vagabond, an inefficient advocate, a naive housewife, a tantric priest and the ghost of a zamindar; all of whom bring in their unique shades and mannerisms, which make this Manoj Mitra classic, a timeless laugh-riot.

Aritra Biswas
A person having a knack towards creative and performing arts, Aritra has been performing in his school, college and corporate office in plays and skits. He has also acted as the lead in a short film named "Crush". Having been an integral part of Chennai Toastmasters, he is a Toastmasters certified Competent Communicator. He was introduced to theatre when he joined Forum Three in 2017 and he is loving the experience. A versatile singer and a poet too, Aritra has also tried his hands in filmmaking and his debut directorial venture - a short film named "Prashn" got released (on YouTube) recently under his banner of Navigator Movies.

Sagnik Sinha
Sagnik Sinha is a Bangalore based actor who is proficient in English, Hindi and Bengali. He has been an actor since 2014 and is known for his performances in  Schweyk In The Second World War, A Terrorist Hanged, Mi'raj, Romeo and Juliet, and Tipu Sultan Ke Khwaab.

Aditya Tiwari
Aditya Tiwari, a budding actor, eloquent in Hindi and English, loves art and is trained in many aspects of it. His scripted theatre acting includes plays ‘Tipu Sultan ke khwaab’ and ‘Boiled beans on toast’ by playwright Girish Karnad.

He worked as a teacher, holds a masters degree in Mechanical Engineering and is also a certified Fitness Consultant.

Sanjay Ar
He is a fitness fanatic, having a degree in Mechanical Engineering.....has a dream to become an actor.

Jacob Mammen Jacob
Enthusiastic, budding, theatre artist from Kottayam, Kerala, who has been acting in plays since his school days. He is proficient in English and Malayalam. In school, he was part of a stage adaptation of Roald Dahl's work along with other plays, namely 'Oliver', 'Shapa Moksham' and 'Grease'. Apart from this, he took part in various street plays on social issues like 'Environment Pollution' and 'Women Empowerment'. After a long gap, Jacob restarted his theatre journey in Bangalore where he had the opportunity to work with Jayaprakash Kuloor and Prakash Bhare. Currently, he is part of Forum-Three's latest project which would be staged in early 2018. Jacob calls himself a 'social animal' and is a keen learner with various hobbies and passions like fitness, cars, and literature.

Shibani
Essentially a trained Bharathanatyam dancer, Shibani Naidu started out with theatre by performing at several musicals as a dancer. And since then begun her fascination for the all-round performing arts. She has been an active part of the Theatre circle in Chennai who has performed as an actor and dancer at numerous theatre productions, musicals, short-plays, performed at The World Theatre Day and participated and won at The Short And Sweet Theatre Festival 2016. She hopes to continue her fervour for theatre even after her recent move to Bangalore.