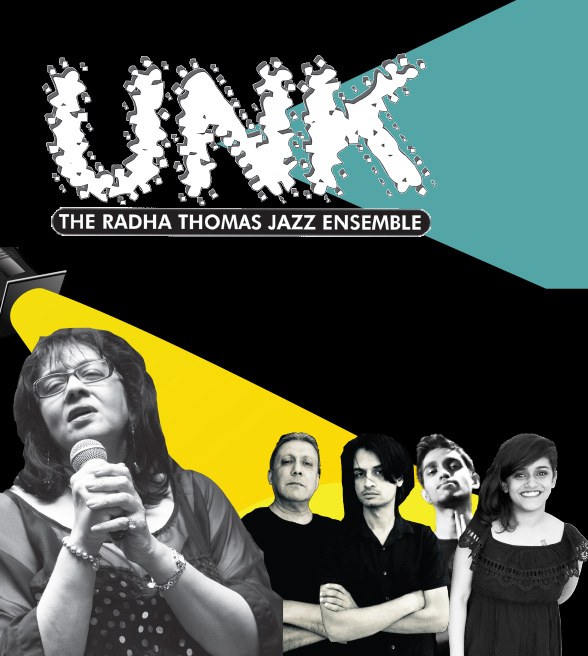 Jazz standards, jazz vocalese, original music and much more, UNK has been performing all over India and abroad for the past 10 years. Never in Whitefield, they are delighted to present their music at Jagriti for the very first time.

Radha Thomas began headlining while still in her teens in a rock band called Human Bondage, which was India’s most popular band in the 70s. She soon developed a strong taste for jazz, which is her favourite kind of music. She also began combining the tonal complexities of jazz with the rhythmic nuances of Indian classical music.

Thomas (nee Shottam) represented India at European jazz festivals and made her way to New York, the home of jazz, where she lived and performed for almost 20 years with such musicians as John Scofield, Randy Brecker, Michael Brecker, John Faddis, Alex Blake, David Liebman, John Abercrombie, Ryo Kawasaki, Joe Farrell and many others in some of NYC’s most famous jazz clubs including Sweet Basil, The Bottom Line, Alice Tully Hall and more.

Her Indian classical vocal training came first from Kumar Gandharva in New Delhi at the Gandharva Maha Vidyalaya, and subsequently with Ustad Farid Ud Din Dagar of the famed Dagar Brothers in the dying art of Drupad singing. She continues to bring these Indian influences into her singing.

She has three albums to her credit and has performed in London, many cities across the USA, France, Poland, Romania, Germany the Far East and of course all over India.

Some jazz include EuropaFest in Romania, the South Asia Performing Arts Festival in New York,  Jazz Yatra, Bengaluru Habba, Indigo Fest, Isai Fest and other popular and prominent festivals in India and abroad in addition to performing at jazz clubs all over India.

She composes much of the original music performed by the band and hosted a weekly jazz show on Radio Indigo in Bangalore.

Aman Mahajan is an Indian pianist, composer and improviser.

Having explored the music of a multitude of nationalities and idioms, his work is influenced by traditional and contemporary forms of music from around the world and inspired by a sense of unity and connection. He is interested in improvised music as a medium of interaction, exploration and creation.

A graduate of the Berklee College of Music (Boston), Aman is currently based in Bangalore, where he teaches privately and performs in his own ensemble, Refuge. He is currently active with his solo piano project refuge.1, UNK: The Radha Thomas Ensemble, piano-guitar duo Tinctures, and cross-cultural band Mystik Vibes.

HARIPRIYA NARASIMHAN, BASS
Haripriya Narasimhan started her journey in music with vocal and violin lessons. Several years later she chanced upon the electric bass, and there was no looking back. She has been playing bass for 3 years now.

Haripriya enjoys playing different styles of music. She has worked with several musical acts across genres, such as Moon Arra (jazz fusion), Poptarts (neo-soul, funk) and Bangalore Broadway Company (Broadway big band). She is also part of an experimental soul-funk band called RiOT. She is currently exploring jazz/bebop. Jazz fascinates her with its intellectual and emotional depth, coupled with its freedom of expression.

Apart from being an active part of the Bangalore music scene, Haripriya teaches electric bass and guitar. She has taught close to 80 students.

Rohit’s sense of rhythm started to develop from a very early age as his father used to play the mridangam. His brother Kiran, an engineer who moonlights as a drummer is a mentor who has played a pivotal role in Rohit’s development as a complete musician. Rohit started playing dholak with the school choir. He then went on to play the congas and finally found the love of his life, “The Drumset” at the age of 17.

Rohit has played all genres of music including rock, jazz, blues, Latin, R&B and neo-soul. Versatility being one of his strengths, he has also worked as a sessions drummer with musicians such as Dr. Prakash Sontakke (Hindustani slide guitar), Jagadeesh M.R (Jazz-fusion guitarist) and others.

Apart from performing and recording, Rohit has been a dedicated teacher for over 5 years. Starting as a drum teacher at Deccan International School, he worked as a drum mentor at Octavium. He has taught close to a hundred students so far. Rohit continues to perform and teach as his career blossoms.

Chandran is a self-taught jazz musician. His style tends towards bebop, influenced principally by horn players. He has played jazz guitar for UNK - The Radha Thomas Ensemble since its inception. By day he is Editor-in-Chief and Managing Director of Explocity - a leading media/publishing houses with publications in India, New York and Dubai.